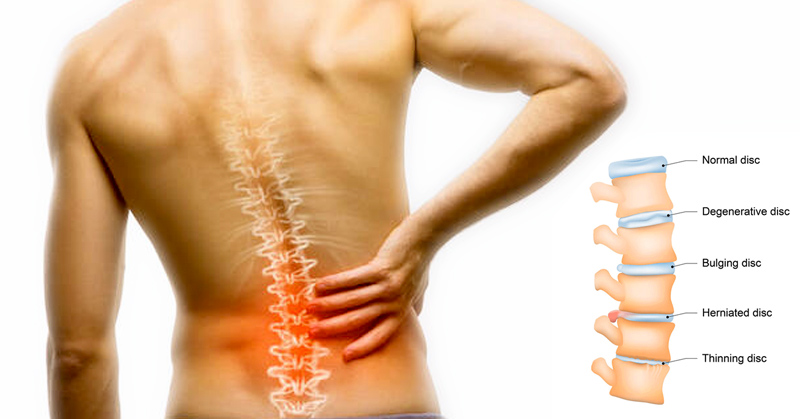 Patients with intervertebral disc herniation are mostly between 30 and 50 years old, and there are more men than women. The most common site is the lumbar spine, followed by the cervical spine (because these two sites are the sites with greater spine mobility).

Lumbar disc herniation is a frequently-occurring and common disease in clinical practice, and it is the most common cause of low back and leg pain. The disease mostly occurs in young adults, and part of it occurs in the elderly. The patient suffers a lot. In severe cases, it can cause paraplegia, which can have a great impact on the life, work and labor of the patient.

The cause of lumbar disc herniation is more complicated. At present, it is generally believed that the herniated disc is mainly caused by corresponding damage on the basis of degeneration. Internal cause: The intervertebral disc tissue bears the weight of the human body's trunk and upper limbs, and is more likely to be strained than other tissues in daily life and work. With the increase of age, as well as the continuous squeeze, traction and other external forces, the intervertebral disc gradually degenerates, the nucleus pulposus water volume decreases, the elasticity is lost, the intervertebral space narrows, the ligaments relax, and the internal cause of herniation is formed. External cause: Under the action of external force, the pressure on the back of the intervertebral disc increases when bending over to lift the weight, and the annulus fibrosus ruptures and the nucleus pulposus protrudes posteriorly and laterally.

1. Degenerative type: Early change, mostly without clinical symptoms and signs, and generally not confused with the prominent type.

2. Bulging type: it is physiological degeneration, the annulus fibrosus is loose but intact, and the nucleus pulposus shrinks. The annulus fibrosus evenly extends beyond the edge of the vertebral body endplate. Generally, there are no clinical symptoms and radicular symptoms rarely appear.

3. Protruding type: The nucleus pulposus protrudes into the spinal canal through the annulus fibrosus, and the posterior longitudinal ligament is not ruptured. The imaging manifestation is that the intervertebral disc is confined to the spinal canal. Some patients have typical radicular symptoms and signs. This type of conservative method can be relieved, and minimally invasive interventional treatment is required if necessary.

4. Prolapse type: the annulus fibrosus and posterior longitudinal ligament are completely ruptured, and the nucleus pulposus protrudes into the spinal canal. There are usually obvious symptoms and signs. The prolapse is difficult to heal itself, and most of them require minimally invasive intervention or surgical treatment.

5. Free type: the prolapsed nucleus pulposus is not connected to the corresponding intervertebral disc, and can be free to the upper and lower segments of the spinal canal disease and the intervertebral foramen. The clinical manifestation is persistent nerve root symptoms or spinal stenosis symptoms, often requiring surgical treatment .

Under traditional surgery, the trauma area of the intervertebral disc surgery and the pain suffered by the patient are relatively large. PIOON has been focusing on research and development for many years and found that combining the wavelengths of 1470nm, 15W and 980nm, 30W is the two best wavelengths for the treatment of lumbar disc herniation, and it has always been safe and effective.