Why choose the diode laser in orthodontic?

There are several different types of lasers, including those that work on hard tissues and can do the job of your dentist’s drill. However, when it comes to lasers in orthodontics, we’re generally talking about soft tissue lasers like the diode laser. Because the light from a diode laser isn’t absorbed well by hard tissue, it’s excellent for procedures involving the soft tissues in your mouth like your gums, as it gives us maximum precision and won’t damage the teeth. In addition, the diode laser provided by Pioon has different power and wavelength options, which can be adapted to  various of clinical treatments.

What are some of the common uses for lasers in orthodontics?

Exposing teeth that are slow to erupt – If your child is ready to get braces but a tooth hasn’t erupted on schedule or not enough of the tooth is exposed to place a braces bracket, sometimes, I can use a laser to remove the gum tissue and reveal the tooth. This can prevent us from waiting months for a slowpoke tooth to make an appearance on its own and eliminate the need for a traditional oral surgery procedure.

Esthetic gingival recontouring – Esthetic gingival recontouring, sometimes called laser gum contouring, is doctor-speak for using the laser to remove and reshape excess gum tissue. For example, if your gums come too far down and are covering too much of your teeth, the teeth can look short or it can create the appearance of a “gummy” smile. With laser gum contouring, I can remove the extra gum tissue and reshape what’s left to give you the perfect frame for your newly aligned teeth. It will bring about a balance between the teeth and gums for a more esthetic smile.

Frenectomy –  There are two kinds of frenums – a lingual frenum and a labial frenum. The lingual frenum is that piece of tissue that runs from the base of the tongue to the bottom of the mouth behind the lower teeth. Sometimes, the size or position can restrict the movement of the tongue, making speech difficult or, in infants, interfering with nursing or bottle feeding. The condition is called “tongue-tied.” Using the laser, an orthodontist or dentist can quickly and painlessly free the tongue to allow a normal range of motion.

More common is labial frenum. The labial frenum is the tissue that goes from the gums above the upper front teeth to the lip. If it’s overly long or wide, it can actually create an unwanted space between the front teeth. The orthodontic laser able to eliminate the tissue between the teeth so that dentist can close the gap with braces or Invisalign.

Removal of tissue tags – Sometimes, tissue tags can form in the mouth. These little growths are typically benign and harmless but their appearance can bother some patients. The diode laser can get rid of them in seconds without any discomfort.

Reducing the pain or severity of aphthous ulcers – Aphthous ulcers, also known as canker sores, are lesions that form in the mouth and along the base of the gums. They can be painful and orthodontic appliances can rub against them causing even more irritation. An orthodontic laser can help speed up healing time and alleviate some of the pain or severity of the sores.

What are the benefits of orthodontic laser treatment?

There are a host of benefits of orthodontic laser treatment as compared to taking a traditional approach, which would usually involve a scalpel or a drill. The laser is:

Gentle and virtually painless. In most cases, no needles are necessary. I can often just apply a topical anesthetic. You won’t feel anything but the laser moving.

Excellent for patients with dental anxiety or a fear of needles. Since needles aren’t usually involved and the laser takes the place of tools like scalpels, it can go a long way in making patients feel less anxious.

Minimizes bleeding and swelling. This is an especially big plus for procedures like laser gum surgery because you won’t have a lengthy healing period or have to spend time away from work or school.

There are some cases of diode laser in orthodontics:

CASE 1: The patient had an extra little tissue tag that really bugged him. You can see it between two of his bottom front teeth. Of all the options to remove it, the laser was definitely the easiest, with no shots, no bleeding, no pain, and taking just minutes! 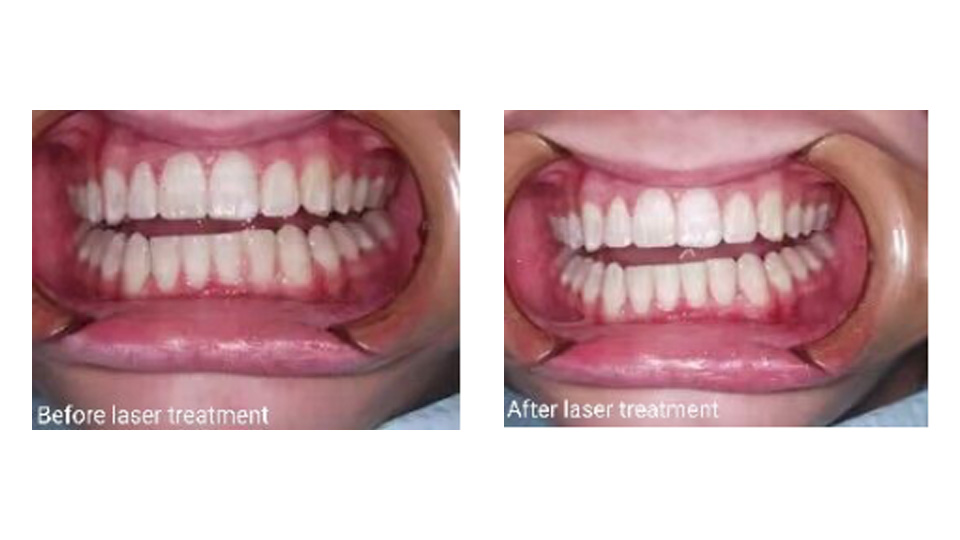 CASE 2: This patient has had a history of thick, fibrous gum tissue. The procedure was done with only some topical numbing solution (no shots!), and there was no bleeding afterward. 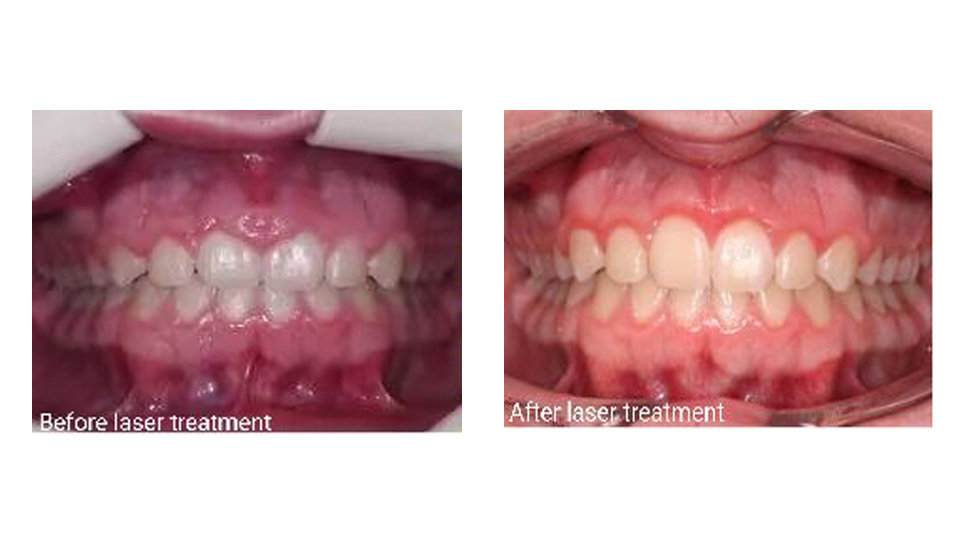