According to the estimating, snoring is affecting as high as 20% of the population at present which may impact people’s breathing during sleep.

Current treatment modalities for snoring may include mucosal removal, coblation or radiofrequency palatoplasty, injection snoreplasty and placement of palatal implants with various disadvantages and side effect such as intraoral injury, but a laser assisted method can avoid this completely.

As per many times study, people found that energy deliverance by an ablative mode using lasers or RF attempts to reduce excessive palatal volume with further scar formation, results in intrapalatal stiffening. However, RF has its drawbacks such as cost for disposables, the need for occasional repeated procedure due to absence of standardization, lack of uvular management, inability of energy control, complications i.e., erosion and ulceration. Even some studies there (contrary to previous short term results) suggests that radiofrequency may be redundant for a long term desired effect.

A diode laser coupled to a flexible fiber and a handle with curved needle was used. The fiber was introduced into the nasal surface of soft palate between palatoglossal and glossopharyngeal arches and advanced progressively anteriorly after pulling the uvula forward three times to create palatal scarring and stiffening. The laser harbors many advantages over other methods. Results with this technique are encouraging further studies and more applications during snoring treatment.Patient satisfaction is greatest with an effective, rapid in-office procedure with minimal post surgical down time at a reasonable cost. 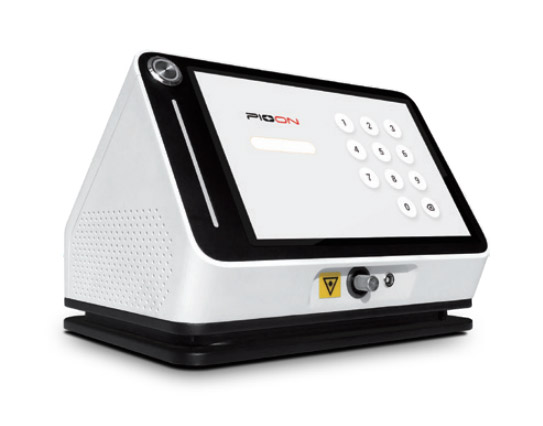 PIOON MEDICAL LASER system---M3, a 980nm near-infra-range (NIR) diode laser is a small, economical, battery operated with a flexible fiber that can be attached to a hand-piece with curved needle tip. Energy deliverance at 7-8 watts is used in continuous mode in contact or interstitially by penetrating into the palatal muscles, by targeting the nasal surface of the uvula and soft palate, the laser created less tissue necrosis and less thermal damage compared to monopolar cautery. One of the limitations of the previous surgical procedures is significant discomfort and swelling that will affect oral intake. By avoiding injury to the oral mucosa traversing and targeting the palatal muscles from its nasal surface we have avoided injury to oral mucosa and eliminated postoperative discomfort associated with deglutition.

So, 980nm Diode Laser is an IDEAL treatment saving you from the Snoring and PIOON laser device is your optimal choice as treatment assistant.