Introduction- The outcome of root canal treatment is based on efficient disinfection of the root canal system and prevention of reinfection. Pulpectomy is defined as a root canal procedure for pulp tissue that is irreversibly infected or necrotic due to caries or trauma in primary teeth. The root canals are debrided and shaped with hand or rotary files. However the instrumentation and irrigation with an inert solution alone cannot adequately reduce the microbial population in a root canal system, disinfection with irrigants such as sodium hypochlorite and/or chlorhexidine is an important step in assuring optimal bacterial decontamination of the canals. But these have disadvantages for example as it is a potent tissue irritant, sodium hypochlorite must not be extruded beyond the apex. We can use LASER to disinfect the canals. Also in primary teeth due to complex pulpal anatomy and curved canals it is difficult to completely remove the pulp and hence the bacterial load. Current chemomechanical cleaning methods do not always achieve these goals, and insufficient root canal disinfection is the main reason for endodontic failure. LASER can aid us to achieve this impossible task of disinfection of root canal system as a whole including the lateral and accessory canals.

Rationale for the use of Laser

1) The effect of laser beam is based on thermal changes, i.e. it generates heat which is bactericidal and thus kills the microorganisms in the root canal. The antibacterial effect of diode lasers has been observed to be more than 1000 micron deep into dentine.

2) Irrigants have a limited penetration into dentinal tubules in the apical 1/3rd when compared to middle and coronal 1/3rd, however lasers can eliminate microorganisms in deeper layers of dentin.

3) Require minimum enlargement of the root canals during cleaning and shaping which would enable maximum amount of disinfection of the canals.

This antibacterial effect of a lasers have broad application spectrum.

Prerequisite for use of LASER in Primary tooth -

2) Wet canals - Saline can be used to wet the canals. Dry canals is a complete contraction while using laser

a) Straight canals - It is measured 2mm short of apex. E.g. the specimen have working length of 12mm. So 12-2= 10 mm. This 10mm will be the length up to which the laser tip will go inside the canal.

5) Not more than 3 pass per canal should be done

6) Total time not exceeding 30sec for the whole tooth.

Steps for Root Canal Disinfection - Under rubber dam isolation all the steps till biomechanical preparation (BMP) remains the same.

Step 1) Irrigation- we wet the canals first with saline.

Step 2) First pass - 200 micron tip at 1W continuous mode with working length 2mm short of apex is used in a circumferential manner at a rate of 2mm/sec without touching the walls of canal from apex to canal orifice. Withdraw the laser tip

3) IRRIGATION - To be repeated

4) Second pass - Repeat the action as in first pass. Withdraw the tip

5) Irrigation with saline to wet the canals

6) Third pass – To be done in same manner as in first pass. Withdraw the tip

1) Root canal disinfection procedure needs to be repeated for every visit.

2) It should be repeated prior to the obturation in case of multiple visit. 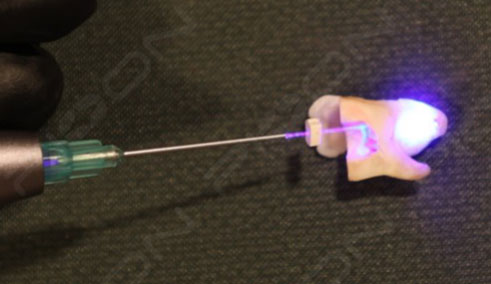 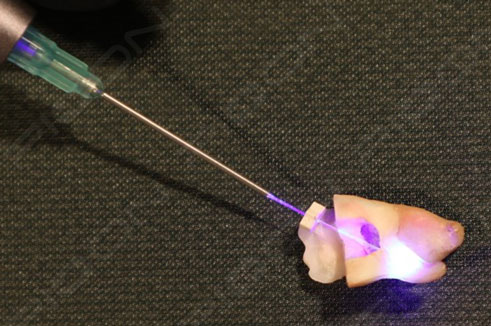